The semicrystalline polymers generally exhibit a greater temperature range for application and a higher modulus at elevated temperatures as was shown in Figure 2. This is due to the  pseudo-crosslinking characteristics of hydrogen bonding. Amorphous polymers would require  significant molecular weight and molecular entanglements to have properties equivalent to semicrystalline polymers. This would result in an unrealistically high melt flow index for the  amorphous materials. Therefore, the majority of hot melt adhesives and sealants are  formulated from semicrystalline polymers, although amorphous polymers are often used as  modifiers and additives.  The application, performance, and cost properties of hot melt adhesives and sealants can vary significantly depending on the base polymer and the specific formulation employed. Typical  properties of several common fully formulated hot melt adhesives are shown in Table 3. 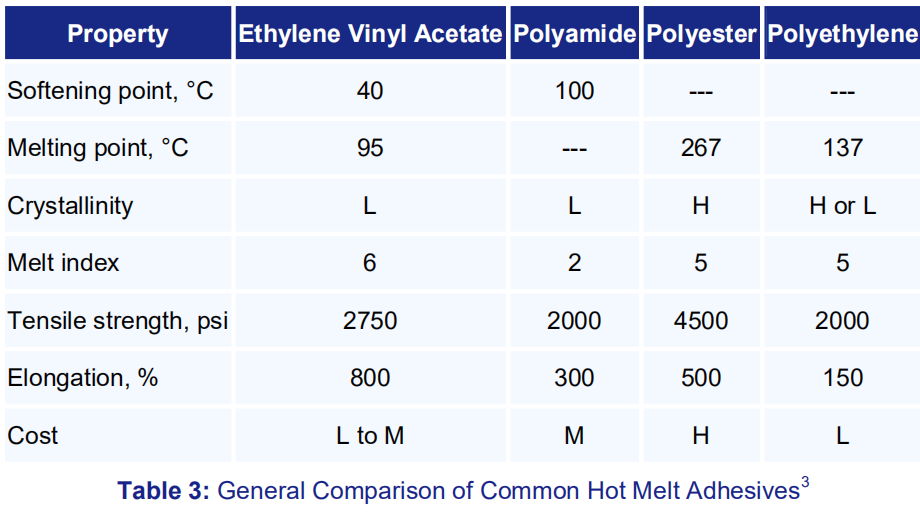 Formulation of EVA Hot Melt Systems  Like other adhesive formulations, hot melt adhesives require a delicate balancing of  constituents relative to the performance and processing properties. The adhesive components  as well as the base polymer play a very significant role in the formulation process. The major  components of a hot melt adhesive or sealant include base polymers, tackifiers, processing  oils and waxes, filler, antioxidants, and UV inhibitors.  • The base polymer is the molecular backbone of the systems, and it is used to provide  the inherent strength and chemical resistance as well as the application  characteristics.  • Tackifiers are added to improve initial adhesion and to modify the base polymer.  • Processing oils and waxes are used to adjust viscosity and set times. Both tackifiers  and processing materials will affect the Tg and Tm of the final product.  • Fillers are used to fine tune certain properties such as melt viscosity, thermal  expansion coefficient, set time, etc.  • Antioxidants are used to provide oxidation resistance - more for the polymer in the  application state rather than in the final joint.  • UV inhibitors are to provide stability against exposure to light.  The selection of formulation components is determined primarily by the chemical compatibility  of the components both during the formulation stage and during the service life stage. Optimal properties and performance can only be exhibited by a formulation where all the components are compatible.  Certain thermoplastic resins do not require modification by way of additives to achieve good  hot melt adhesive properties. These are primarily polyurethanes, polyamides, and polyesters.  But the remaining thermoplastic resins will require compounding with the additives mentioned  above.  Ethylene vinyl acetate (EVA) copolymers are perhaps the most widely used base polymer in  general-purpose hot melt adhesives. The material is essentially a random, amorphous  copolymer with regions of crystallinity. Melt viscosity is very dependent on molecular weight for this material. Melt flow indices ranging from 2 to 200 are possible. Suppliers of EVA resins for  adhesive systems along with information regarding their technical properties can be found in  the SpecialChem4Adhesives polymers database.  EVA copolymers can be made in continuous bulk, solution, or emulsion processes. The  emulsion process produces resins with vinyl acetate content greater than 60% and is more  appropriate for water-based adhesives than for hot melt systems. These high vinyl acetate  resins are more usually described as vinyl acetate ethylene (VAE) copolymers.  Generally, for hot melt adhesives a resin with vinyl acetate concentration of 18-40% is utilized.  The vinyl acetate content can be a significant parameter in varying the properties of the  adhesive. The materials with high vinyl acetate concentration exhibit reduced crystallinity and  increased polarity. The physical property changes as a function of vinyl acetate content is  shown in Table 4. At about 50% vinyl acetate content, all crystallinity is lost. Recrystallization  rate or setting speed is greatly influenced by the choice of specific EVA resin. 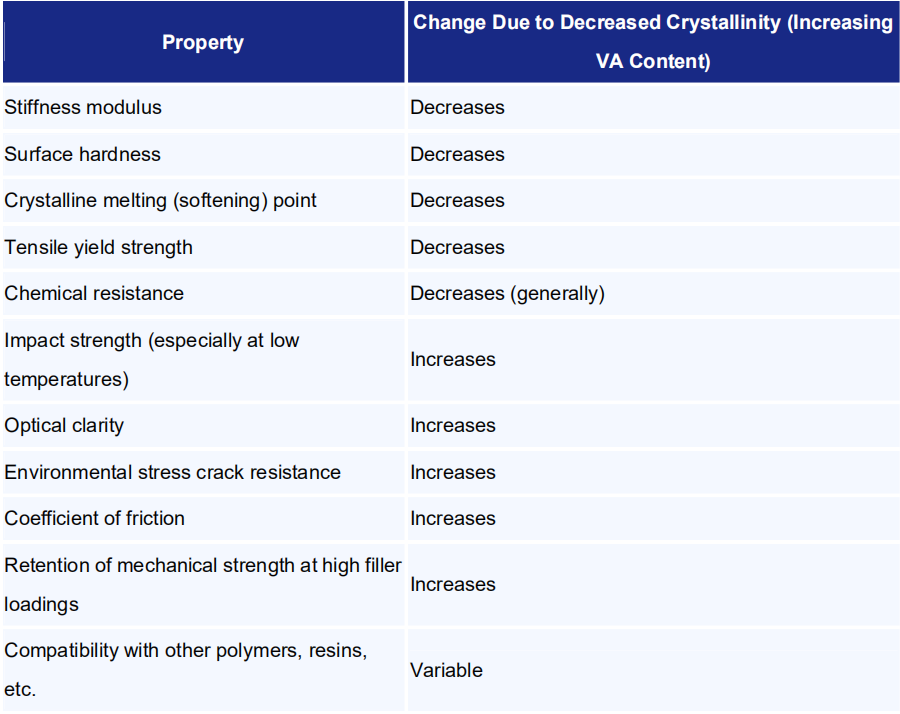 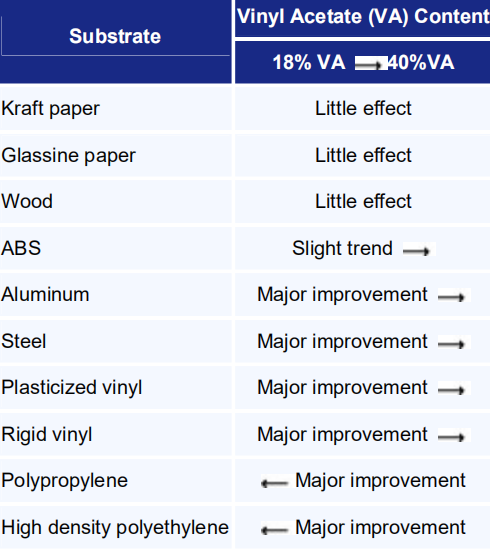