Performance and Application of Biodegradable Plastic PLA and PBS

Polylactic acid (PLA): also known as polylactide, is a polymer obtained by polymerization of lactic acid as the main raw material and belongs to the polyester family. The PLA production process is pollution-free and the product is biodegradable. Waste PLA can be decomposed into carbon dioxide and water after being composted above 55°C or enriched with oxygen and microorganisms, realizing natural material circulation without any impact on the environment. At present, the production of PLA mainly adopts the lactide ring-opening polymerization process. First, lactic acid is dehydrated to form oligomers, then depolymerized to form lactide, and then ring-opening polymerization is carried out to form PLA. The disadvantage of PLA is that the degradation conditions are relatively harsh. However, due to the relatively low cost of PLA in biodegradable plastics, PLA consumption is at the forefront.

Polybutylene succinate (PBS) is an aliphatic polyester prepared by dehydration of succinic acid and butylene glycol through polycondensation reaction. The appearance is milky white, odorless and tasteless. Because of its good biocompatibility and bioabsorbability, it is easily degraded into carbon dioxide and water naturally. It is a typical completely biodegradable material.

PLA has poor toughness, lack of elasticity and flexibility, hard and brittle texture, relatively low melt strength, and slow crystallization rate. The above-mentioned shortcomings limit its application in many aspects. The chemical structure of PLA contains a large number of ester bonds, which results in poor hydrophilicity and the degradation rate needs to be controlled.

PBS is a kind of polyester with high crystallinity and good mechanical properties. Its mechanical strength is similar to general plastics such as polypropylene and polyethylene. It can be adapted to the preparation processes of injection molding, extrusion, blown film and lamination.

The performance comparison of PLA and PBS and other plastics is shown in the table below: 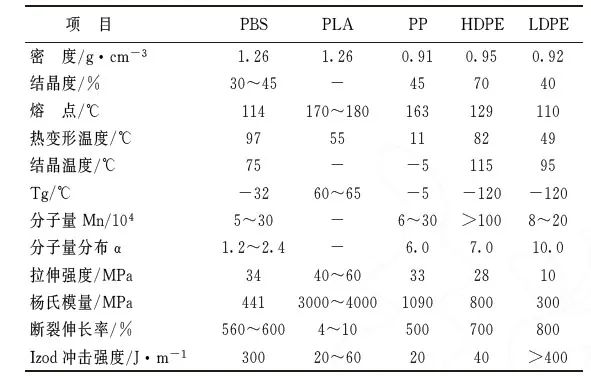 PLA has good mechanical strength, transparency, processability and biocompatibility, and can be used as various food packaging materials. However, its shortcomings such as high brittleness, low barrier performance, and poor thermal stability severely restrict its application. Use nanotechnology to compound PLA with various organic and inorganic nanofillers to realize the multifunctionality and high performance of PLA. Such as improving its mechanical properties, thermal stability, ultraviolet light/gas barrier properties, antibacterial properties, etc., thereby promoting the application of PLA in the field of food packaging.

In addition, the appearance of the products 3D printed with PLA materials is smoother and has no warping edges, and has been widely used in biomedical fields including medical models, bone tissue repair scaffolds, and drug delivery systems.

In addition, modified PBS products tend to degrade slowly in nature and have special characteristics. Therefore, while developing PBS and its modified copolymers, the importance of biodegradation of PBS in China has begun to pay attention. It mainly focuses on the biocomposting degradation of PBS, the microbial degradation of PBS and the research of PBS degrading enzymes.